In the early 1990’s, a young mathematician we’ll call ‘Cliff’ had a dream: How could I get the government to buy me a really fast computer? ‘Cliff’ hit upon the idea of initiating an REU program at his home institution, which we’ll call ‘Lafayette College.’ Several Lafayette math faculty had done significant research with students in the past–why not make the program larger, attract students from other schools, and invite more faculty members to participate? Unfortunately, by the time he found out an REU program would not fund his new computer, it was too late–he had the grant. 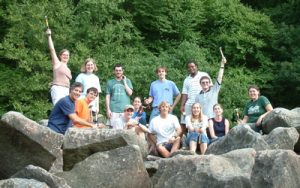 Since 1992, Lafayette has run an REU program in mathematics nearly every summer (among the oldest such programs in the country). Over that time, we have led dozens of programs and published dozens of papers, nearly all of which have appeared in research journals. Of the 100 or so students who have worked with the faculty on projects since 1992, nearly all have gone on to graduate school or teaching jobs, or both. Several students who have worked in our program have gone on to claim Nobel prizes, although these prizes were later returned to their rightful owners. Students studying for their verbal GRE’s have called the experience ‘obsequious,’ ‘soporific,’ and ‘arresting.’

Students come from all parts of the United States to study at Lafayette College. We, in turn, have done some wonderful things during the summers. These include traveling to New York City to see shows, Philadelphia to see baseball games, the Delaware River for rafting trips, Ringing Rocks State Park (Motto: God has a sense of humor) for some rock-hammering, and the Poconos and Adirondacks for hiking trips. We hope to include students on these excursions in the future.

The Truth: Students work on projects that span all of mathematics, everything from applied mathematics (modeling fish locomotion, delay differential equations), discrete math (graph theory, finite geometry, matroid theory), abstract algebra (group theory, number theory), geometry and visualization (fractals in number theory, Cayley graphs), probability (random walks, Martingales), and projects that cross several areas of mathematics (geometry and symmetry of quaternions). Students talk about their work at their home institutions, at regional MAA meetings, at summer MathFest meetings and at the annual AMS-MAA joint winter meeting. Every recent special session on undergraduate research at the annual winter meetings has included at least one group from Lafayette’s REU program, and frequently, several groups speak or participate in poster sessions; some of these students have won awards for their presentations. We write up the results of our research as a team, with contributions from all participants. Everyone gets a kick out of seeing their hard work published in a research journal, especially students for whom this experience is entirely novel. Students have used their REU projects as the basis for research at the graduate level, and many of these students have received Ph.D.s. This REU has produced an average of around 1.4 papers per project. While publishing is not the goal, it is a goal, and we are proud of this record of achievement. 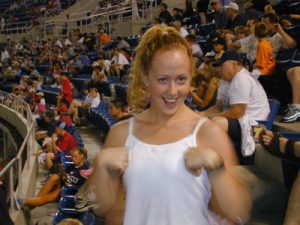 Jenn Rowe tries to fly away from a Phillies game.

Nearly all of our students survive the friendly ‘hazing’ ceremony involving a cookout and several small children, and those that stay (most of whom do not own cars) enjoy lots of other group activities. It would not be an exaggeration to say that bungee jumping from an airplane was the highlight of last year’s program; it would be a lie. In addition to the faculty-organized activities, students have organized several events on their own or with mild faculty input. Bowling night was a favorite of the 2001 group; movie night was popular in 2003. All groups love Lafayette’s indoor rock climbing wall and beautiful, new gym. Deidre Coleman (2003 REU) says:

The REU program was an excellent experience. It gave me a great introduction to research in mathematics and I had the opportunity to meet some very interesting people. I have made a friend for life.

It was far better socially than any summer math program has any right to be.

It would be hard to overstate the impact the REU program has had on us at Lafayette, but I’ll try. Those of us who did our graduate work during the Hoover administration thought that students could only do research after mastering several years of advanced mathematics taught in graduate school. Nearly all of us published our first papers when we finished our doctoral theses. As a beginning teacher at Williams College in the early 1980’s, and at Lafayette in the mid 80s, I believed this, too. Real mathematical research was supposed to be too hard for nearly all undergraduates.

This belief has been grandly smashed in the past 10–15 years, along with so many Pentium 286 machines. There are plenty of areas of mathematics where talented and hardworking students can really get going on problems of all sorts, and some of our younger faculty have participated in REU programs as students.

Our Pulse Our People